Welcome to the ENTF Events page!

Below you will find our monthly committee meetings in our different systems areas highlighted by color, as well as any additional ENTF events and events added by our partners (i.e. “Community Events”).

If you have an event to share, please use the “Add an Event” link at the bottom of the calendar, and follow the prompts. Thank you!

Nationally acclaimed author Andrew Fisher will be in Grand Rapids to discuss his book Big Hunger: The Unholy Alliance Between Corporate America and Anti-Hunger Groups.

The decline of Rust Belt communities since the 1980s has been paralleled by the rapid growth of food banks. Instead of challenging the government and corporations to provide living wages and good jobs, the anti-hunger movement has instead built alliances with Walmart, Tyson, Monsanto, and other socially irresponsible companies. Big Hunger reveals the damage caused by this hunger-industrial complex, and offers a new vision for the anti-hunger movement to shift toward a focus on health, economic justice, and boldtering local economies.

Join us at Cathedral Square for a discussion with Andrew and a panel featuring local stakeholders. This event is free and open to the public. 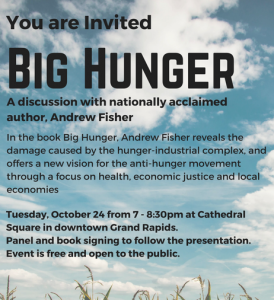